Santa Claus (or just Santa) is a main character in the Christmas Specials. He was kidnapped by the Wario Bros in the Christmas Special 2011, and helped save the Nutcrackers in the 2012 Christmas Special. He put Sonic in the Wario Bros' stocking every year since 2011 and gave Peach a life size Mario in 2012. In 2013, Santa got an update when MLPB got a new Santa plush. The Wario Bros. attempted to trap Santa in a butterfly net, until Santa gave them a present, which turned out to be Sonic. But by that time, Santa had left. He also made a cameo in the 2014 special's "Gimme Thumbs!" along with Mrs. Claus' first appearance. 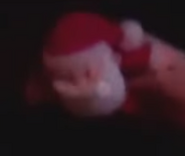 Santa Claus, as seen in Sonic the Snowman.
Add a photo to this gallery
Retrieved from "https://marioluigiplushbros.fandom.com/wiki/Santa_Claus?oldid=13642"
Community content is available under CC-BY-SA unless otherwise noted.